It was only the first mile marker and I felt like crap. The ego was running through the usual excuses: started too fast, too tired, it was too hot, should've brought some gels, didn't train enough. What am I even doing here, I asked myself. And all of a sudden it occurred to me. Here I was, doing what I love to do, running on trails through the woods, and I'm doing everything to avoid the experience. And so I slowed down, relaxed the muscles and keyed in to my surroundings. In the present moment. And not a moment too soon either! As I turned the bend I almost ran over a huge rattlesnake!

It was slow going from there on out. But I was having fun again, doing what I love to do.

Elite ultrarunner Geoff Roes got some heat for writing on his blog that 2011 was his most enjoyable running year, even though he suffered some of the greatest competitive disappointments of his running career. I can understand that distinction. Objectively, I performed poorly last night, and yet I am satisfied with how things turned out.

The Warrior Princess Trail Run is a fun little race put on by the Whitten family to raise money for babies with Trisomy disease and their families. There are 10 mile and10k races and a 1 mile fun run. They did an excellent job drumming up excitement for both the cause and the race. The volunteers were great; you got cheered on like a rock star each time you passed through the start/finish area. I was a little disappointed to hear the the rattlesnake was killed, the poor guy was guilty of nothing other than crossing a trail at the wrong time.  About half of the 10 miler was on the fairly level but rocky mountain bike trails just East of Keystone State Park, while the second leg is out and back on the mostly abandoned Old Route 51 that follows the Arkansas River. I hope this race will be with us for many  years to come! 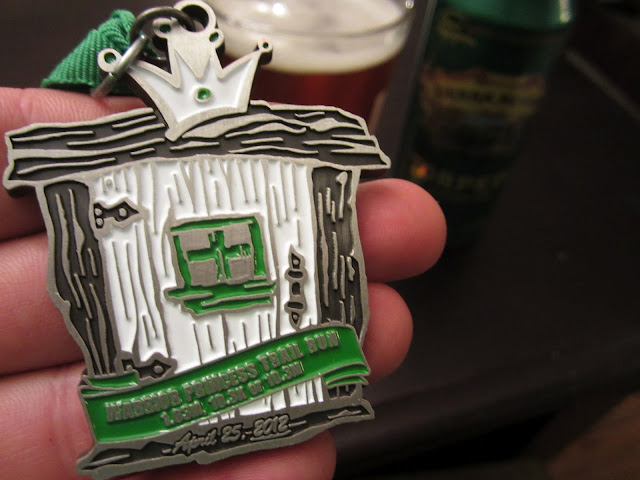 Sierra Nevada Torpedo "Extra" IPA for the recovery. In 16 oz. cans. This beer reminds me of the Great Divide Titan IPA, piney and floral hops with a substantial malt backbone. Not sure what is extra about it, but its decent all the same.
Posted by Brianofthemarsh at 6:52 PM