According to the Brewers Association, Colorado has a brewery for every 42,000 residents. In contrast, the Sooner State averages 416, 000 people per brewery. Perhaps that gives you an idea of the prominence of the microbrewery in Coloradan culture. Thanks to my sister- in- law, I now have a number of brews to try from the Centennial State that are unavailable in these parts. 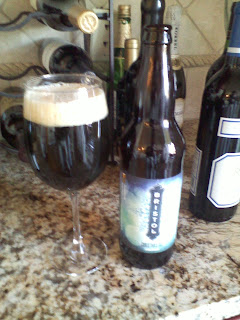 This one from Bristol Brewing Co. in Colorado Springs and is a spiced lager. The beer pours out dark brown to black and it smells like a grandma's kitchen on Christmas. The clove and Cinnamon hit you right away on the taste. Banana, ginger bread cookies, brown sugar and other familiar but elusive flavors in the background. A speck of hops in there to keep it real, but any more would have ruined what they were going for. "Liquid pie" is what I would rename this one. A nice treat to get your holiday spirits up.
Posted by Brianofthemarsh at 6:22 AM