Portland Oregon's Widmer Brothers Brewing is onto something with their Rotator IPA series. The idea is to rotate through four different takes on the style every several months or so, ensuring that you'll get a fresh batch if you stick with the most current release. Although nothing outstanding, the first two releases were solid and affordable contributions to the slim Oklahoma IPA market.

I've never been a fan of rye bread, but as is often the case, beer has a way of making palatable that which in its more natural form I would have avoided. O'Ryely's definitely falls into the "hearty" IPA category. Just look at the dark amber color. You notice the rye malt right away, but the hops are right behind. Grapefruit mostly, with a bitter finish. Again, nothing to knock your socks off with, but a very drinkable IPA. 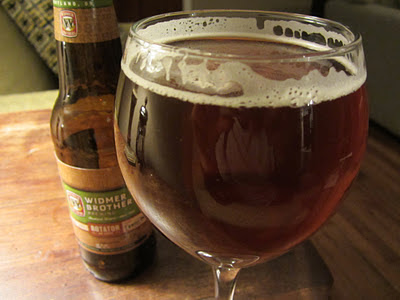 Cheers!
Posted by Brianofthemarsh at 5:30 PM