This morning was the annual "Turkey and Taturs" trail race up on Turkey mountain. There is a 50k, 25k and a 10k race, with first two sharing the same 15.5 miles course.

I registered for the 25k last year, but a last minute injury forced me to "DNS". That was probably for the good, for I was living in Wichita at the time and by no means prepared for performing well on the technical and steep terrain.

This year was a different story. You could say that I have been preparing single mindedly for this race since I moved into town in July.

Race day arrived with nearly perfect racing weather, at least in my book. Overcast,but not cold, without any wind. The foliage was beautiful. The race was in September last year; I hope the race organizers stick to this later date for future races.

I started at the front to avoid the early jamming of runners that happens at some trail races. From the parking area, we were led to the trails by a couple of fast kids, who soon dropped off once the front runners were safely following the pink ribboned trails. I thought that this might be their sole task for the day, but it turns out that they both went on to run the 25k at an impressive time.

Chris, the eventual winner, took on the lead from the start. Steve fell in at second and I followed close behind. Chris disappeared from sight quickly, never to be seen again until the finish line. Steve and I ran together for awhile. No one seemed to be anywhere near us in either direction. Where were all the other fast racers?

At about 4.5 miles in or so I began to experience stomach pains, but nothing that a little H2O at a providentially placed water jug on the blue trail didn't fix. At around 6 miles Steve was interested in gaining some ground on the front runner, while I was getting a bit nervous about spending it all early in the race. We parted ways. I continued to clip along at a decent pace, however. I really hammered the downhills but tended to power walk the steep inclines.

At about mile 7 or 8, on my favorite path on the eastern end of the mountain, the "Ho Chi Min" trail, I hit my first wall. It was like all the energy just zapped out of me. I could barely move beyond a pathetic shuffle. A few gels would have come in handy here... note to self. Eventually I made it down to the main parking lot and took my time refueling at the aid station there. Thank you to whoever made the salted potatoes! What a blessing! It was here that I was passed by the female front runner and another guy. I didn't care, my focus now was to simply finish without any more drama.

I began to feel better on, of all places, the steep climb along Elwood. Some guy was standing at the top blowing an obnoxious horn... just the kind of mental boost I needed. Another aid station at mile 11 and things were looking up. Perhaps I would be able to get back into third after all. But, alas, it was not to be. I hit a few more mini walls in the last three miles that kept me in 5th place for a finish of 2:43

I am happy with my performance despite the blowup. In hindsight, perhaps it would have been wiser to hold back at the beginning...and yet... it was fun to run with Steve for awhile...running up in front with him raised the bar mentally. Steve never caught Chris, but finished with an impressive time for 2nd place.

Anyway, congrats to all the racers who danced on Turkey today, especially those crazy 50kers. 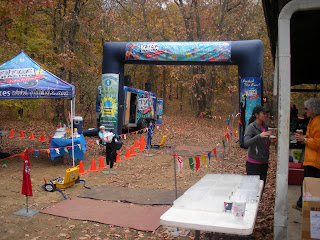 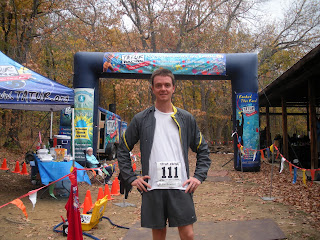 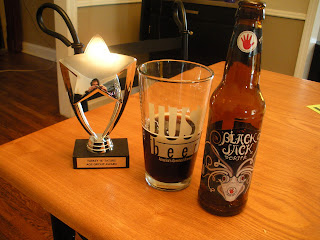 Posted by Brianofthemarsh at 6:24 PM