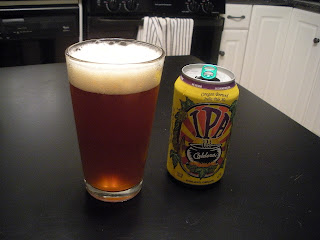 This brew comes from a mecca of trail running: Ashland, Oregon. I was a bit wary about picking up this beer, for the cans are not dated. I had terrible luck over the summer in Tulsa with reputable IPAs that were probably past their shelf life. If there's anything worse than an adjunct lager its a stale IPA.

The aroma is nothing impressive; citrus hops and malt. The taste, however, is very good. Citrusy hops dominate the palate. There's also a bit of that piney bitterness in there as well. The malt is there, but not as assertive as other IPAs. There's nothing amazing about this beer, but it is a solid example of the style. It's probably one of the better IPAs available in Oklahoma.

I've found that this beer is better on the colder side. Many say that IPAs should be served at cellar temp, and that may be true for some...but I found that this brew was best straight from the fridge in the lower 40s.

This beer definitely gets a thumbs up!
Posted by Brianofthemarsh at 5:17 PM