Sunday was the inaugural Lipbuster Challenge, designed to answer one simple question: how many times can you run up and down the hill along Elwood Ave. in an hour? The climb is not very big, 140 feet or so, but is pretty steep by any standard. In addition, Lipbuster is an eroded mess (thanks to a laissez faire attitude on trail use around here) which makes the downhill particularly taxing. There would be three heats, with the second one reserved for the "elites" with prize money.

I initially hesitated on this one; 45 bucks is steep for a .5 mile out and back course. But in the end I just had to know how many repeats I could do. And it was Father's Day after all!

I ran in the first heat. I got in 10 repeats with around 3 minutes left on the clock, nowhere near enough time to bag another climb.  Sure, it was tough, but I can't shake this nagging feeling that I didn't give it my all. Especially since the winner also did 10 and didn't try for another with almost 6 minutes on the clock!

The idea was that such a short and steep course would make for great spectating. I support all attempts to make trail running a more competitive, spectator friendly, sport. There were a few people watching the first heat, a few more came to cheer on the elites, but overall it was a fairly quiet event.

I slowly walked up to the top to get a good view of things. The elite race didn't turn out to be that competitive though, despite the prize money awarded to the top three finishers in each sex. One guy basically dominated the men's race (14 repeats), and the women's field was only three deep. I suppose this is to be expected for a first year event. Hopefully the idea will catch on and next year we'll start to see something more like this: 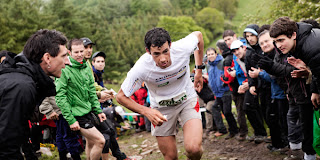