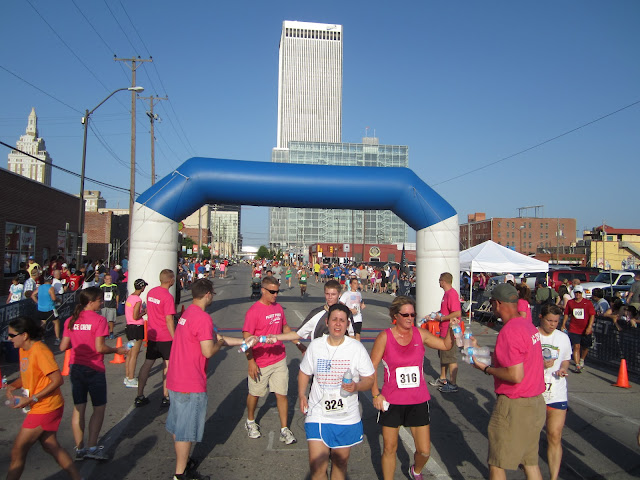 Wednesday morning was the Firecracker 5k, a well attended run through the Blue Dome and Brady districts of downtown Tulsa. It was nice to be part of that general excitement at the starting line that you just don't get at most trail races. I felt strong and pushed it hard, reaching for a sub- 21 minute finish or at the very least a new PR. I was a bit disappointed at the finish, however, when I saw the clock at 23:16, three seconds slower than my PR from over a year ago!

Now in retrospect, my goal for this race was unrealistic. 21 minutes was an arbitrary number not based on any actual measurements from training (I don't use a Garmin or watch). But I also had no real reason to expect that a few weeks of 5k specific training would result in a new PR. That PR comes from a time when I was doing shorter races on a more consistent basis. I may be stronger overall and a better runner at longer distances, but that does not translate into faster running at shorter distances. Duh.

In other words, if I want a new 5k PR, one that I can live with for awhile, I'll need to give it more work and have another go at it. So I'll probably do another 5k instead of the duathalon before my focus shifts to the Fall races. I'll be honest, the duathalon sounds like more fun than another 5k, but I'm at a point where doing what "looks like fun" doesn't cut it anymore. I actually want to see growth in my running.

Posted by Brianofthemarsh at 10:41 AM