About a week ago I headed over to Turkey Mountain to see if my knee had made any progress. Nope. Three miles in and the same old funkiness kicks in. Frustrating.

But the weather has been great (until today) and there are plenty of other things to do in the great outdoors, after all. Rather than wallow in self pity, I've decided to focus my energies on cycling. On the road, I would like to do a century before the baby comes in June. More on that goal in a future post. I'm also very close to converting my Raliegh Pro to a cyclocross bike. Its either that or sell its parts and get a entry level  mountain bike. As I've explained before, the latter option feels adulterous, considering our history together. I've seen a number of cyclocross bikes on the more moderate trails of Turkey and I think I would enjoy carefully navigating around obstacles as opposed to plowing straight over them. More on that soon as well.

With the next season supposedly only hours away (did we ever have a winter?) the Red Ales, for reasons that escape me, are legion. Amber Ale, as a style, is not my favorite, but can be quite delicious if they crank up the American hops a bit. I had a suspicion that this would be the case with both the Coop (OKC) and Marshall (Tulsa) takes on the style.

Coop, btw, has one of the greatest IPA's I've ever had the good fortune to try. I've tried some of the West Coast IPAs of renown, and let me tell you, Coop holds its own. They need to can it! Their Native Amber is excellent, if not quite the awesomeness of their IPA. It Smells of citrus. Smooth on the mouth, with a toasty maltiness. And nice fresh hops: juicy citrus followed by the more bitter rind. A great option for those who love fresh hops but need too bring balance in their lives now and then. 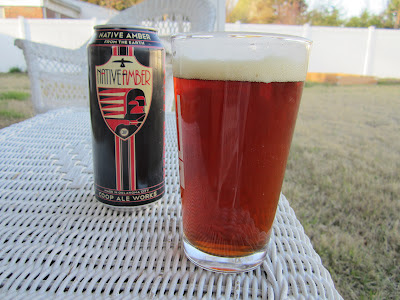 Look at how much darker Marshall's Revival is! Its blood red when held up to the light. This one is going to be more malty, I'm thinking. I take a sniff and smell citrus and...roasted malt. My first sip only confirms my suspicions: rich roasted malt, caramel, and citrus hops. Pretty soon, however, more bitter, earthy hops take over the show. A very drinkable, if slightly unusual, take on the style. 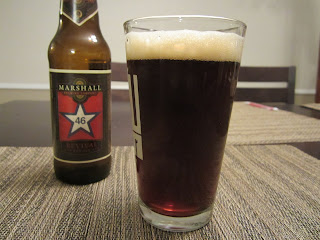 While I enjoyed both brews, I would say that Coop's Native is the better amber. Its closer to what a Amber ale should be, while having enough fresh hoppiness to keep me interested.
Posted by Brianofthemarsh at 7:14 PM