I felt moved to explore a new locale today for my long run of the week. I have been pounding the trails at Turkey Mt. quite a bit lately and needed break new ground.

Chandler Park is a nice family park out on a hill just West of downtown Tulsa. There are a number of scenic vistas for picnics, as well as a number of rock formations that attract the areas rock climbing community.

Less known are the miles and miles of trails that run through the largely undeveloped area south and west of the park limits. I read that the area was vast, hilly and riddled with single track and atv trails.

The area also has a reputation for being very muddy. While it had rained pretty heavily two days before, I figured that the preceding day should have dried things up enough to avoid any major problems.

I parked at the western end of the park, out by the last baseball diamond. I followed and old semi- paved road to the North that quickly turned into dirt.

At this stage, my intuition was proving right; the road was runnable minus a few flooded areas. 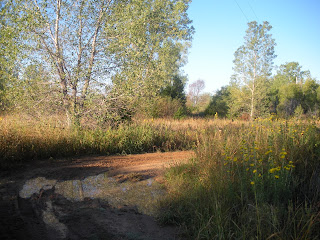 As I discovered later, a single track trail branches off at the end of this road. I missed it going out and picked up a rugged atv trail. Open meadows mixed with Cottonwood quickly transitioned to dense forest. 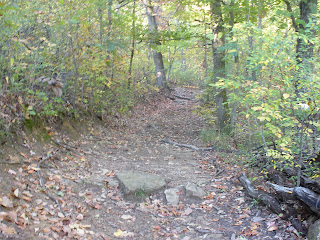 A nice view between the trees of a hill soon to be climbed. 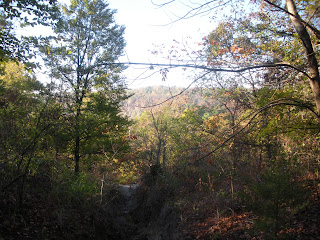 There were a few steep hills by Oklahoma standards. The camera does a poor job capturing the grade here. 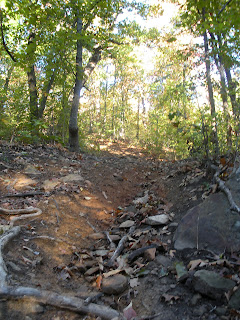 Just beyond the rise of this hill were a series of rock formations similar to those found in Chandler park. 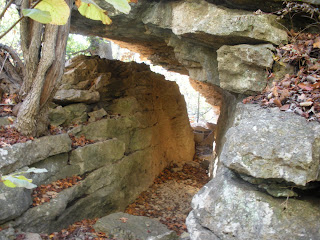 Unfortunately, this is where my camera ran out of juice. This was just the beginning, really, of an incredible adventure.

It turned out that most of these path were atv trails with only one or two miles of single track that I could find. While single track is more ascetically pleasing, atv trails, formed by gravity defying machines, tend to provide a better workout.

On the rise of one hill just East of the powerline there is a beautiful area of mixed prairie  that is peppered with beautiful cottonwoods that are just beginning to turn. With fleeting glimpses of distant hills North of the Arkansas, I felt for a moment that I was running in the north woods of Maine.

I eventually hit some very muddy areas that presented an obstacle to fast running. At this point in the game, I was too attuned to my surroundings to care.

This area is more remote, more "wild", than Turkey Mt. I just don't know if it's as consistently runnable.

Overall the garmin logged 8.5 miles by the time I returned to the car, but with all those hills it sure felt like more than that. I will return to this place once we get at least two weeks of dry weather.
Posted by Brianofthemarsh at 6:53 PM